My parents took all of us to Peurta Vallarta, Mexico this last week. We stayed at a resort called The Grand Mayan. It was beautiful! Everyone had the best time!

I've posted some pictures that we took. We didn't take nearly enough to show how much fun we had. The fun just couldn't stop long enough to take lots of pics.

As much fun as we had, our little family has a little list of things that kinda went wrong for us.

1. Lezlee got sunburned on the first day. It blistered pretty bad and it was murder to put on sunblock after that!

2. Something funny (in a really sad way) was going on with Quince's stomach. He threw up almost everything and was extremely picky about food. He wasn't nursing well, nor was he taking a bottle well. Two things he usually does easily. So he was basically upset the whole week. As you can see from his pictures, he's not lacking for food. He weighs 16 lbs 12 oz and he's only 3 1/2 months!

3. We brought Quince's bouncy seat with the vibrations specifically because he lives in that seat. He sleeps in it every night at home and it's his favorite place to relax, other than of course someone's arms! I took it out to put it together on the first day we were there and 1/2 way through we changed hotel rooms. I guess that I left part of the seat in the old room. By the time I realized it, the maids had cleaned up the old room and the missing pieces are never to be seen again. So we were without Q's favorite thing and he had to be held the entire trip. We love the boy, but he needs to be set down sometimes!

4. Since Q wasn't eating well I got a breast infection on Sunday night. It basically knocked me out for a while. They are very painful. The best way to get rid of the infection is to nurse through it, but that didn't work very well because Quince wouldn't eat. So I was kinda sick for a couple days. But we had lots of help from my wonderful family and our babysitter, Shaleigh.

6. Linc also had a touch of pink eye. Luckily I followed an impression to pack the antibiotic drops with all the other medicine, just in case.

7. Lezlee had a fever of 104.3 * one night and was miserable. We took her to the doctor at the resort. Turns out she had croup and an ear infection. So the last 2 days were even tougher than the first two for her. Poor girl!

Anyway, needless to say, we weren't the fun ones to be around most of the time. I kept appolagizing to my family the whole time. I know we didn't ruin anyone's trip, but we didn't make it pleasant all the time either. They were great though, of course!

Despite us not feeling well, we all had a blast!
Posted by Spence & Rach at 10:04 AM

The resort is huge! The pool area is like a casino, looks like once you go in you could be lost in there for days. Oh well, at least you'd get a nice tan. I'm really glad that you're back though. We missed you guys! I don't know what we'll do when you move. Guess we should just put our house up for sale too. What's up with Kasey? Someone needs to get that girl blogging.

Okay maybe all of those little things don't sound like fun but the trip as a whole does. My parents just took all my fam to Maui and also brought babysitters- it was so nice to be able to go out as adults each night so I hear you on that!

Wow, are the kids okay now? That's some scary stuff (especially the 104.3 temp). Glad you had fun, though. Can't believe how big Q has gotten, and can't wait for Disney World next week!

Okay so when we talked about this one the phone i was overwhelmed - but the list! oh my - you are the most wonderful mother in the world. i am hoping that the kids are starting to feel better today! ahh!

I'm impressed that with all the illness you still had a good time! I guess in a resort like that it would be hard not to, it's gorgeous! What awesome parents to bring a babysitter along...that is the greatest idea ever!
How are moving plans going?
Alicia 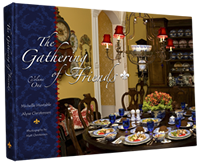